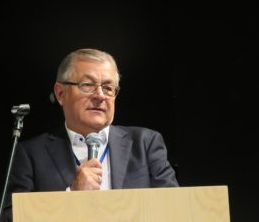 CELEBRATION AND EXCHANGE IN TALLINN

The international atmosphere of former days was revived in the old Hanseatic city of Tallinn this week (8-12 October) when church and organisational leaders from 37 European countries gathered there for celebration and exchange at the Hope for Europe congress.

The 370 evangelical delegates, representing seventeen Europe-wide networks, met over five days in the communist-built Salme Culturecentre to deliberate on the challenges and opportunities in Europe today. Since the previous Hope for Europe congresses held in Budapest in 2002 and 2011, the European landscape has become polarised with the ravages of recession, the arrival of waves of refugees and migrants, and the rise of populism, nationalism and illiberalism.

Under the auspices of the European Evangelical Alliance (EEA), the congress brought together practitioners active in the arts, children’s work, education, healthcare, urban missions, stewardship, media and communications, enabling the disabled, ministries to Muslims, Roma, refugees and victims of trafficking. Others linked peace and reconciliation ministries, prayer networks and personnel of alliances affiliated with the EEA.

While the bleak grey concrete stalinist-style Kultuurikeskus reminded participants from former-communist countries of days of oppression, its many meeting rooms, coffee corners and plenary auditorium nevertheless leant itself to effective cross-pollination among the networks.

Reports from networks told of remarkable growth among migrant churches and of their positive influence on European society. The Chinese Church in Copenhagen had more doctorates than any other church in Denmark, one speaker said; conversions of Muslims numbered in the thousands, and migrant churches were also spreading in the thousands, becoming the hope of the church across Europe.

Featuring among the artists and speakers were members of the disability network, eloquently represented by the new network convenor, Baiba Baikovska from Latvia. Seated on the platform in her wheelchair, Ms Baikovska presented her own personal handicap as an ‘opportunity to glorify God’, quoting from John’s Gospel (ch.9:1-3) and citing examples of ways her disability had opened doors to bless others.

Under the congress theme ‘Unity with diversity’, plenary speakers addressed the multi-national, multi-lingual audience with stories of hope, examples of courage and calls for intergenerational partnership. Helen Sworn drew from mission experience in Cambodia to offer lessons on network building by envisioning what could change in one’s neighbourhood and recognising what resources and potential partners were available for the task.

Andrzej Turkanik from Salzburg surveyed the various post-war generations and their characteristics, urging older generations to be available to those longing for ‘grandparenting’, with humble hearts. Brazilian Rosalee Velloso, principal of Redcliffe College in the UK, urged her listeners to learn from Israel’s exile in Babylon to obey the prophetic call to seek the welfare of the city while trusting God the Father to work out his purposes in the long run. Roger Sutton brought numerous reports of city-wide movements of churches emerging in the UK, on the continent and beyond, partnering in prayer and action for the flourishing of life in the cities.

In the closing session, Johannes Reimer told of his own upbringing in the Soviet Union as a communist youth leader, and his expulsion from Estonia over 40 years ago and his subsequent conversion as a Christian. Describing the revival in the 1970’s in the St Olav’s Church whose tower still dominates the Tallinn skyline, he urged participants not to succumb to the temptations of nationalism as had happened in the past to quench the revival. Europe’s problem was not the many Muslims coming to Europe, he said, but the failure of the church to be welcoming, inclusive, embracing and transformational.

A Night of Hope in the old city centre brought the congress to a colourful and celebrational closure, with pop-up concerts held in a park, atmospheric restaurants and historic churches. Mixing soul, folk and pop with an Orthodox choir and a jazz trio, and a Georgian ensemble with medieval musicians, the closing evening rounded off a week of ‘unity with diversity’ focused on the person and story of Jesus Christ.